John Wes Townley, in the No. 05 Bad Boy Mowers Chevrolet, finishes 26th after the "Big One" clears the track late in the NASCAR Camping World Truck Series at Daytona. 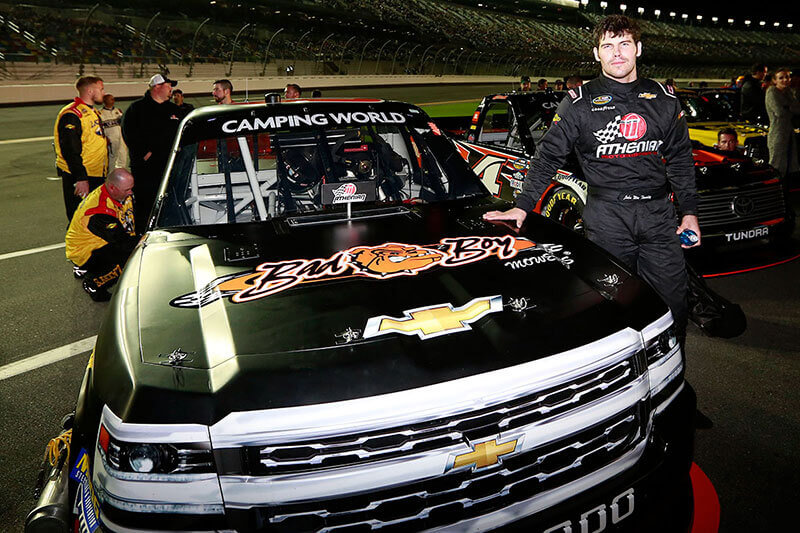 The 26-year-old made it three-wide by jumping to the outside, got a mammoth surge and began pulling a group of trucks toward the front of the field.

But Townley's potential race-winning move was foiled when Grant Enfinger's No. 33 Chevrolet got shoved out of line and directly into Townley's path.

Two laps later Townley's night came to a premature end, the victim of a multi-truck collision triggered by a fellow competitor just ahead of him.

"That's just the way things go at Daytona," said a disappointed Townley, who started seventh. "I got a group going on the outside just before the wreck that took us out and I really think we had enough momentum to jump into the lead. But Grant jumped in front of us and it wiped out my momentum."

The wild and unpredictable Camping World Truck Series lived up to its billing Friday night at Daytona International Speedway, with 18 trucks involved in a crash with less than 10 laps remaining in the NextEra Energy Resources 250.

Then, on the final lap of the season-opening race, another multi-truck incident unfolded, this one seeing the truck of Christopher Bell rolling several times on the front stretch. Bell climbed from the truck without assistance, although NASCAR officials later said the driver had been transported to a local hospital for further evaluation. At 1 a.m. ET Saturday, Kyle Busch Motorsports tweeted a press release that stated Bell had been evaluated and released.

Contact between Timothy Peters, Matt Crafton and John Hunter Nemechek appeared to set off the first incident, which unfolded in Turn 1 and brought out the red flag as officials and safety workers attended to those involved.

"Not quite sure what happened," driver Cameron Hayley said after being evaluated and released from the infield care center. "Hard racing there, I guess. We just caught bumpers the wrong way, I guess that's Daytona."

Rookie Rico Abreu, Haley's teammate at ThorSport Racing, was also among those collected. "Just trying to get the third outside lane going," Abreu said. "You could get it going at times, just really tried to stay patient all night and it comes down to this."

"Definitely an unfortunate day," said Brad Keselowski Racing driver Austin Theriault. "We could make moves, pull really good. I laid it all out there. It's just sad for the guys. I'm fine, glad I hit the safety barrier." 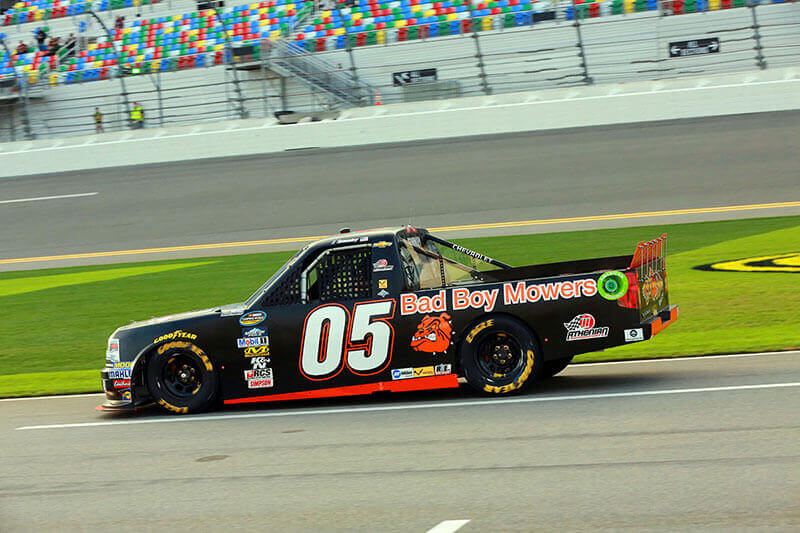 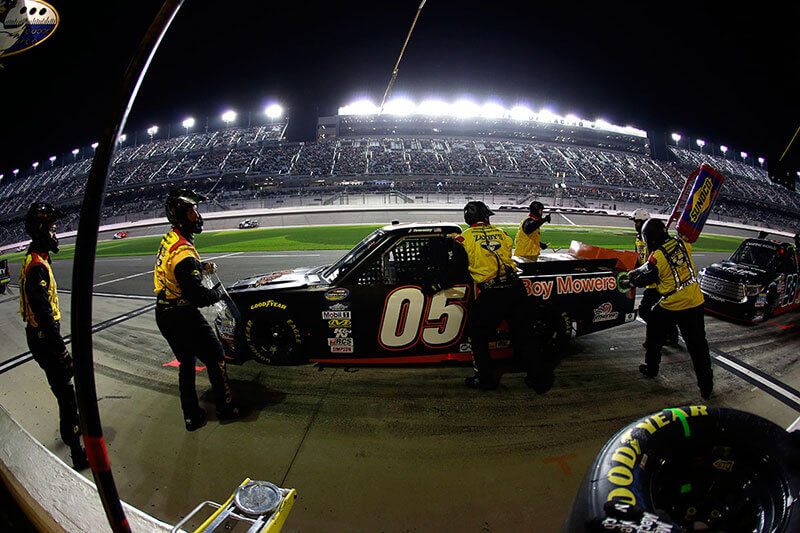 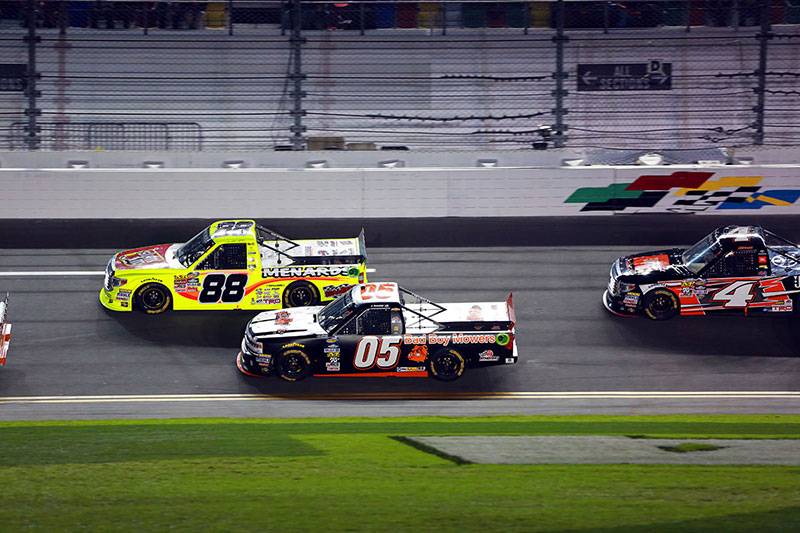 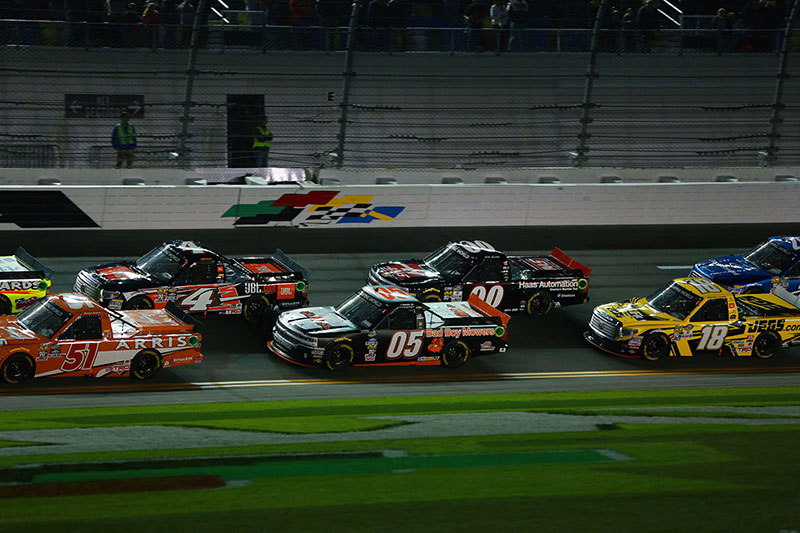 It was the sixth caution in the scheduled 100-lap season-opening event. Caution No. 7 wasn't far behind.

After a delay of 27 min., 54 seconds, officials removed the red flag and allowed teams to begin work on repairing those entries able to continue.

"The big wreck I expected," third-place finisher Parker Kligerman said. "I was sitting there at the back of the pack, everyone was trying to go three-wide, trying to make the outside line work and it just wouldn't work.

"There eventually comes a point in the race where you can see the race kind of take a character, the race takes a shift and everyone's just hitting each other as hard as they can. I could see it happening so I sort of backed off and suddenly the 88, of two-time series champion Matt Crafton, gets turned sideways and that big wreck happened."

Johnny Sauter, with GMS Racing, won the event. It was his second victory at the 2.5-mile track,he also won here in 2013, and the 11th of his career.

It was the first Camping World Truck Series win for Chevrolet at Daytona.

Learn more about the NASCAR Camping World Truck Series and schedules at their website. Visit athenianms.com for more information on Athenian Motorsports, and follow John Wes Townley on his Facebook and Twitter pages. Don't forget to Like Bad Boy Mowers on Facebook to keep up with all our latest news and announcements.